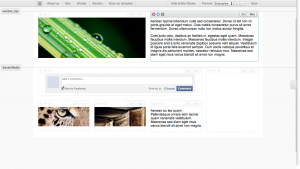 The layout editor with a few widgets and boxes.

The layout editor is a tool that is used to edit Layouts. It is composed of a topbar, sidebar and edit area. Through the layout editor much of the content of Pages and Channel Layouts can be edited. The layout editor also features in-place editor previewing, end user preview testing and template creation.(depending on type of layout)

* Does not apply to all layouts.

These screenshots display the key components of the layout editor discussed above.

The following sections outlines the various quick handles for different elements of the Layout Editor. 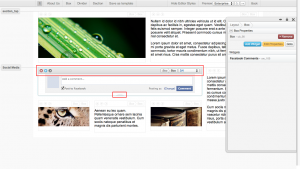 Each box provides a few different quick update properties that can be used in the layout editor. These include the following:

* Not available on all boxes. (ex: Divider) 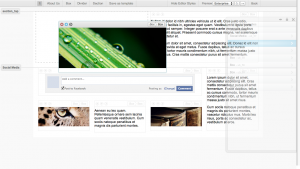 A box being moved around in the layout editor. The outlined area denotes where the box will be placed once released.

Moving boxes around a layout is a straightforward process. To move a box follow the steps below: 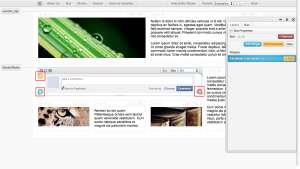 Each widget provides three quick update handles that can be used to modify certain properties of the widget. These handles are described below:

* Some widgets may not have these properties. Ex:Widgets that are locked may not have an edit or remove handle within the layout editor. 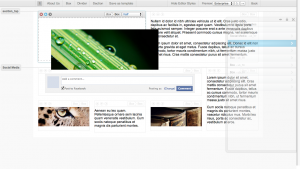 A box being moved around in the layout editor. The outlined area denotes where the box will be placed once released.

Widgets can be moved around either the box it already belongs to or into the content area of a different box. To move a widget follow the steps below:

Depending on your level of knowledge with HTML/CSS/JS, unroole pages can be designed in one of three ways.

A page designed strictly with widgets, themes and content from the CMS. No HTML widgets or external files are used.

The unroole layout editor has been designed to allow for the majority of content to be entered and managed through the CMS with little to no knowledge of HTML, CSS or JavaScript. Building layouts in the CMS using only content from within the CMS and without adding or modifying the strcuture of the layout through HTML widgets is referred to as standard design. Using a standard design allow for maximum compatibility and reduces the chance of layout rendering error. The standard design approach allows the widgets to generate the HTML/CSS/JS of a layout themselves, whereas the Static Layout Design or Composite Layout Design can corrupt the page with invalid user syntax. 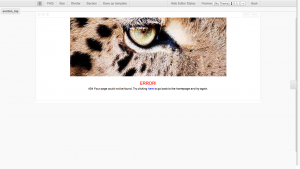 A layout with a number of standard widgets and an HTML widget (highlighted) providing additional functionality through custom JS/CSS and HTML. 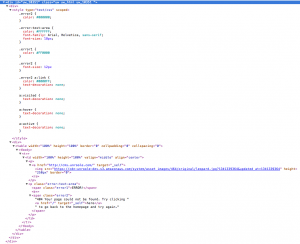 The following is the code used in an HTML widget to produce the screenshot above as part of a static design on the 'Tiger eye' 404 page.

A static design of a website functions much like other CMS's and allows a content editor to add any HTML code to a page instead of using the pre-built widgets. This can be useful when designing pages which have dynamic content that does not conform to the rest of the site structure or theme. A simple content markup allows certain types of content to be linked within HTML widgets, Stylesheets, JavaScripts and other text areas to manage the inclusion of content to these static text areas. To read more about this syntax see unroole Content Markup.

In the images to the right we see a simple page with the default top section, a single full sized box and an HTML widget which takes up the space of the box. The HTML that was used to create this static design is shown to the right and includes a sample of the unroole content markup used to display the 'tiger eye' image seen for this layout. 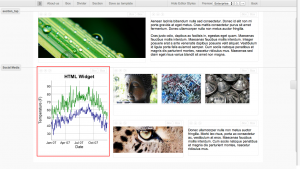 A layout with a number of standard widgets and an HTML widget (highlighted) providing additional functionality through custom JS/CSS and HTML.

Composite design blends the idea's of Standard Layout Design and Static Layout Design together. It uses a combination of standard pre-made widgets in a layout but then provides additional functionality through targeted HTML widget. Composite designs are good for adding in functionality without having to create a specific widget. This is particularly useful if the functionality only exists in one layout and can be done without an system deployments or updates.