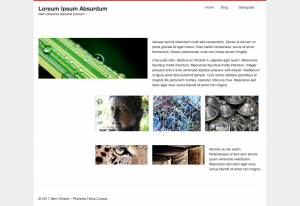 A simple example page to illustrate the structure of an unroole layout. 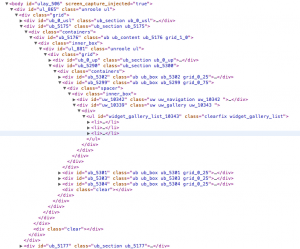 The first bit of html produced for the page displayed above.

Whether or not you are designing a theme or adding stylesheet or javascript elements to a channel it is useful to know the structure and markup of the HTML code generated by a layout. This code is the same for every layout in the system whether it is generated from a page or channel layout.

On the right are two screeenshots which illustrate a fully formed page and the first part of the generated HTML code for that page. The rendered HTML markup gives many different areas for you to reference when digging deep into the HTML/CSS/JS of a layout. You will notice the clear hierarchy of elements as explained in the Layout Box Model article is generated. You should notice a few conventions that are employed in the markup to make it easier to reference elements or build your own HTML as part of an HTML widget.

If you are working directly with the DOM it is useful to know which classes and id's are automatically generated by the system for use by theme builders or through stylesheets. The table below lists the various attributes, what element they are included in and their purpose.