Roles and permissions work together in the system to give users various access levels to different panels. 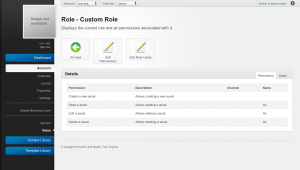 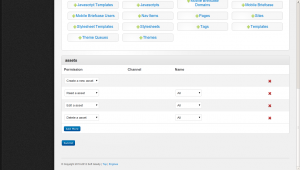 Managing permissions in the role editor

Permissions in the system govern which actions and panels a user has access to. Permissions can be very granular eithier giving access to a single piece of content or multiple pieces. This granularity allows administrators to setup additional admin with specific access levels.

Permissions are grouped in the system through roles. A permission cannot given outside of a role. 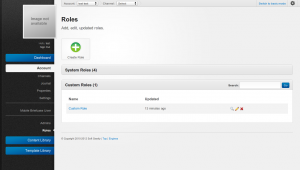 Roles are simply groupings of permissions. These groupings are then given to each user to give them various access levels throughout the system. There are two types of roles:

System roles encompass all system permissions for a given profile, account or channel. System roles can generally not be changed (other than their name) and exist to allow for a minimal level of access to the system. Each user in the system also has a special system role assigned only to them which holds their permissions outside of individual accounts.

User roles are roles which are defined by an administrator of the system. These roles can be used to eithier extend the permissions given to a user through system roles or to create entirely new roles to be used on an account or channel.

Admins in the system are only able to manage account level roles. All other roles are managed automatically by the system or through the admin console.